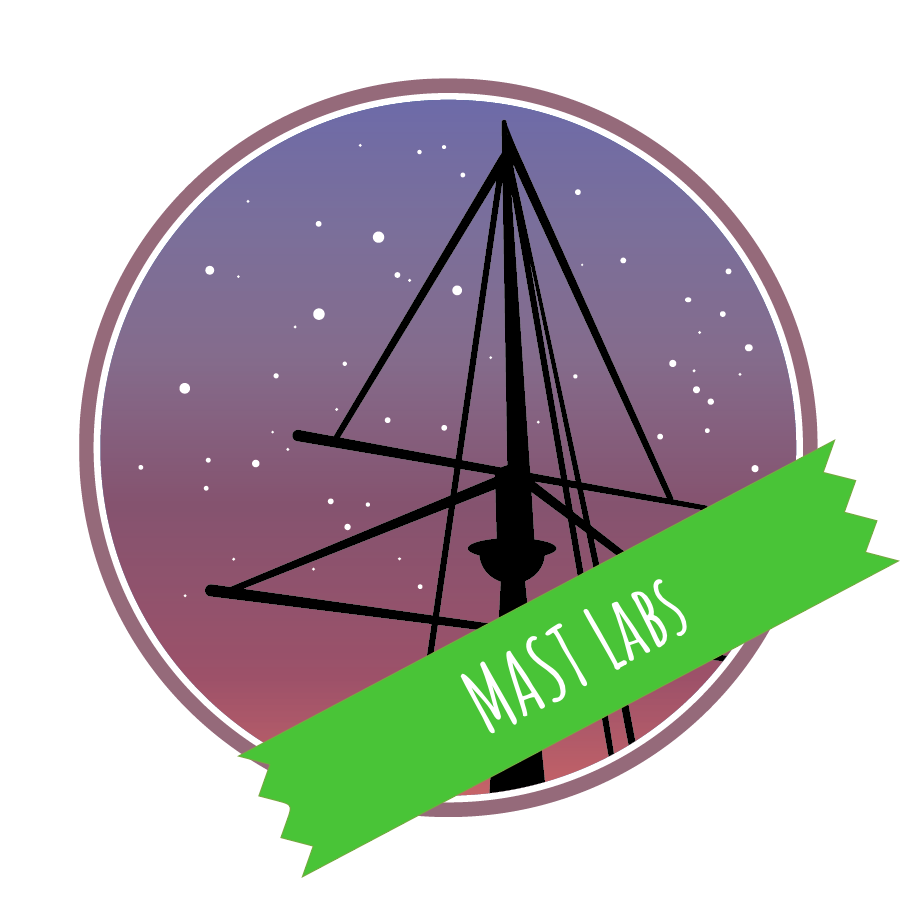 tl;dr: In this post we’re going to show you how to deploy your own self-healing, Kubernetes-managed JupyterHub cluster on Amazon Web Services using the infrastructure automation tool Ansible.

Jupyter Notebooks make it easy to capture data-driven workflows that combine code, equations, text, and visualizations. JupyterHub is an analysis platform that allows astronomers to run notebooks, access a terminal, install custom software and much more. The JupyterHub environment is rapidly becoming a core part of the science platforms being developed by LSST, NOAO, SciServer, and here at STScI.

If you want to create a new JupyterHub environment, there’s a popular community guide ‘Zero to JupyterHub’ which walks you through, step by step how to create a JupyterHub deployment (managed by Kubernetes) on a variety of different platforms.

As great as this guide is, there’s a lot of copying and pasting required and even for someone experienced, it takes a good hour or two to create a new cluster.

In this blog post we’re going to walk you through a new resource we’ve recently released to the community which is essentially the Zero to JupyterHub guide but as an executable Ansible playbook. By following this guide, building a new JupyterHub cluster can be done with a a single command and takes about 5 minutes.

At the end of this playbook you’ll have a basic JupyterHub installation suitable for use within a research group or collaboration.

Before we get stuck in to the actual guide, it’s worth spending a moment defining some of the terms/technologies we’re going to be using here today.

Kubernetes: A platform for managing deployments of services (the service in this case being JupyterHub).

EFS: A scalable, cloud-hosted file-system. In this example, the home directories of our users are stored on an EFS volume.

We’re going to start by assuming that you already have an Amazon Web Services account, and are logged in to the AWS console at http://console.aws.amazon.com. If you don’t have an account, you can sign up here.

Install Ansible (2.5 or higher) on your local machine

You’ll also need to have Ansible version 2.5 or higher installed on your local machine to execute the playbook later on – 2.4 will almost certainly not work with this tutorial. This guide walks you through how to install Ansible on Mac OSX, and guides for other platforms can be found here.

Before we can deploy our JupyterHub cluster, we need to configure some pieces on the AWS console:

First, we need to visit the Identity and Access Management (IAM) and create a new IAM role that can act on our behalf when setting up the JupyterHub console.

Specifically, we need to create IAM role with following permissions: 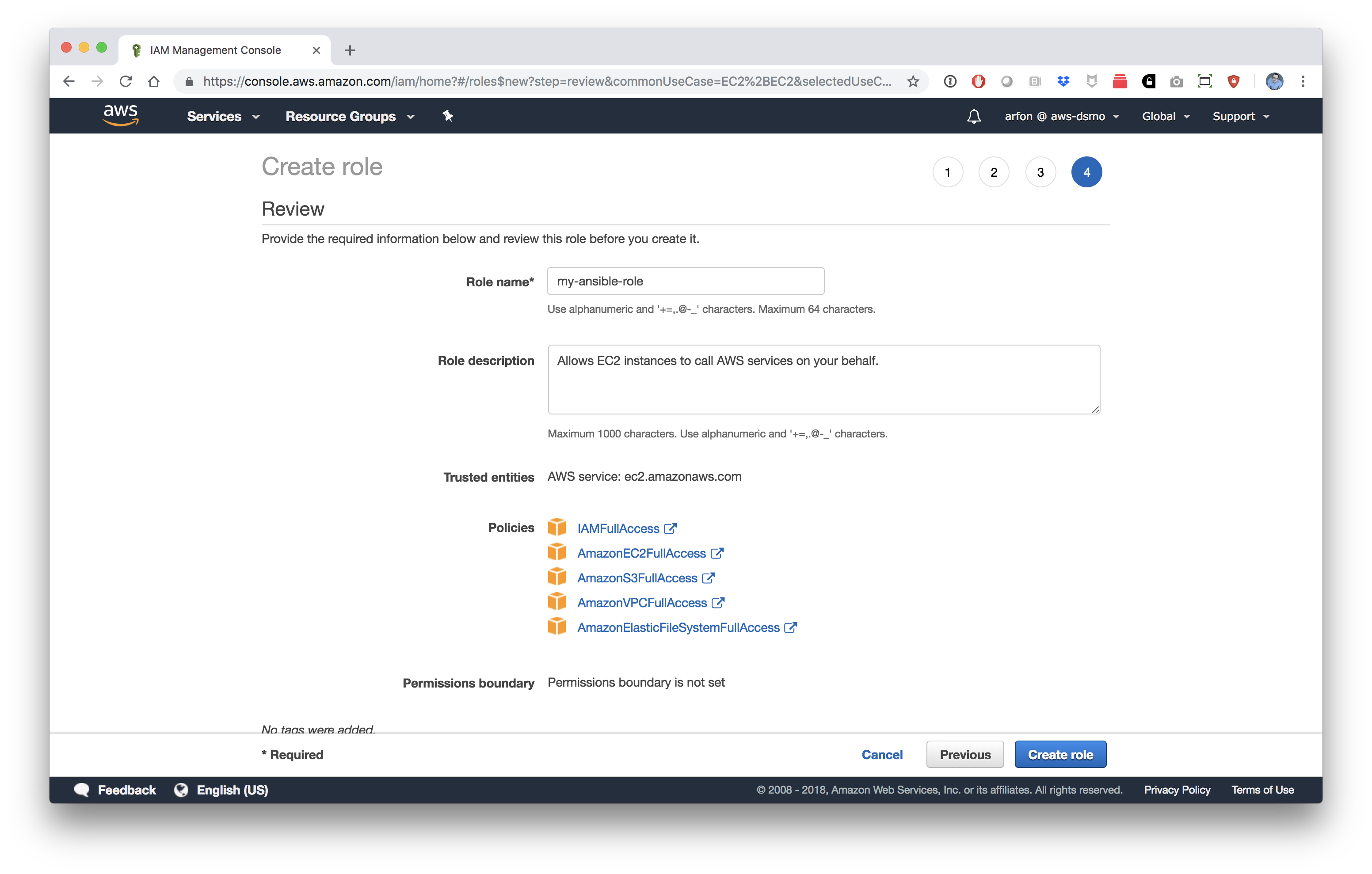 Next we need to start up a small (micro) instance which will act on our behalf within the AWS environment when the Ansible commands are executed. 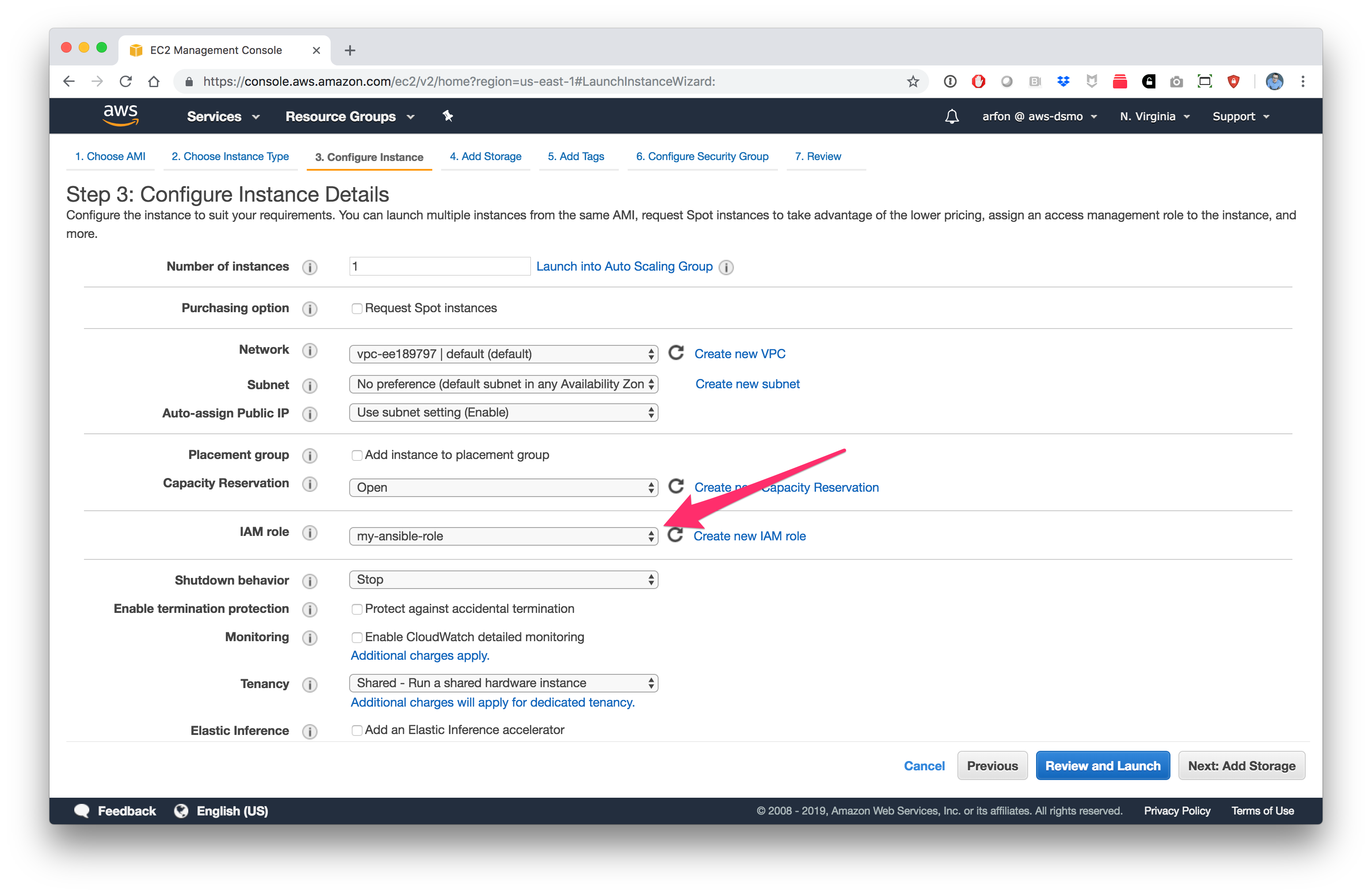 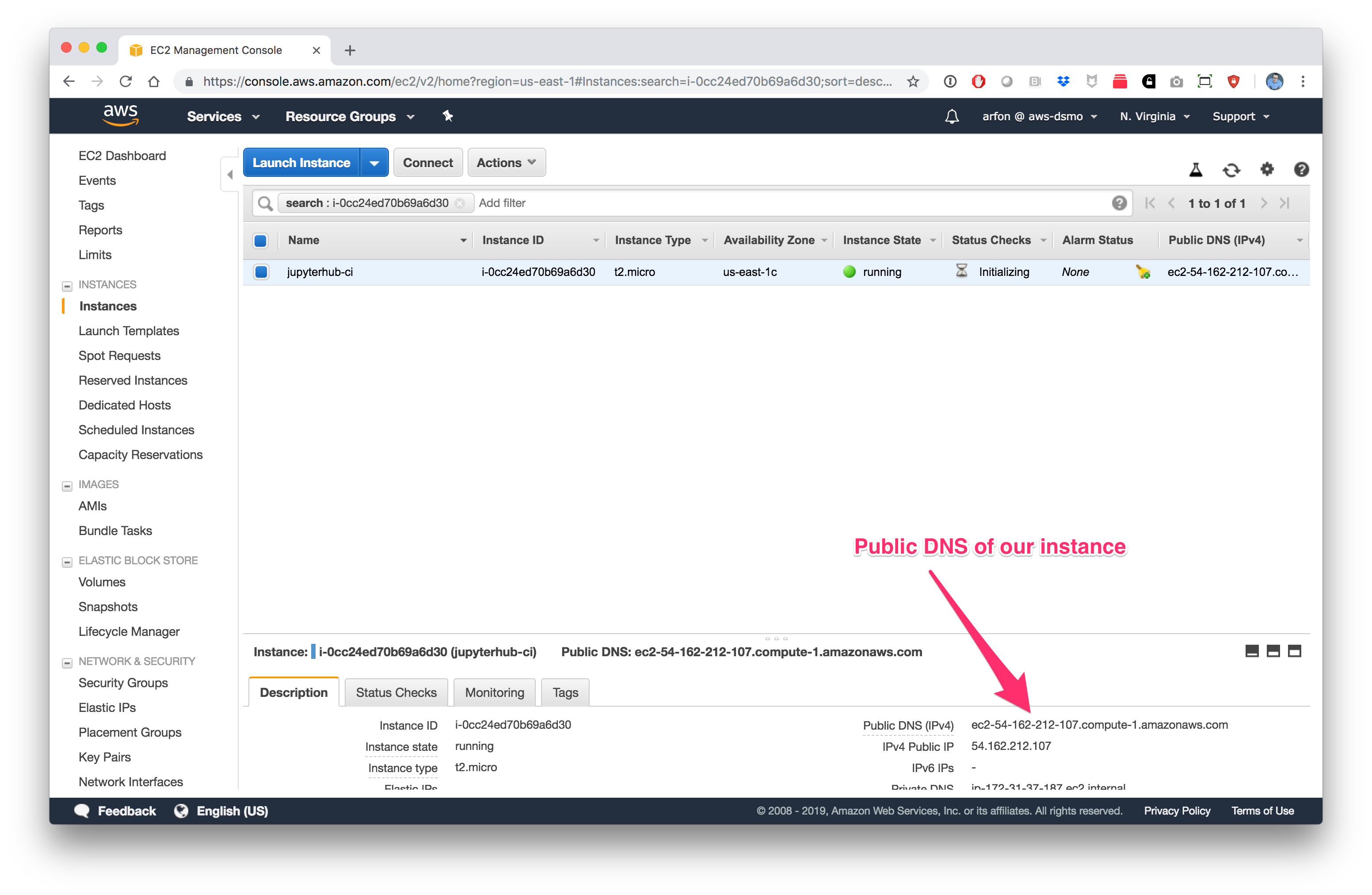 Next we need to clone the Z2JH Ansible repository and make some configuration changes based on the instance we’ve just deployed on AWS.

Edit the hosts file: replace the contents of this file with the CI node public DNS (IPv4) as the only line of this file.

Edit the group_vars/all to configure your deployment.

namespace: Choose a custom name or leave default, many things are named based on this for consistency
aws_region: Here we’re using us-east-1 but others are available
ansible_ssh_private_key_file: The absolute local path of key file (.pem) which you use to ssh into the CI node

Now we’re ready to deploy our JupyterHub cluster. We do this with the following command:

Allow for the ‘Verify that kops setup is complete’ step to retry as many as 20 times, it’s simply polling for a successfully setup Kubernetes cluster which can take a few minutes to complete1.

Once the play is successfully complete, the URL of your new JupyterHub environment will be printed out in the terminal. 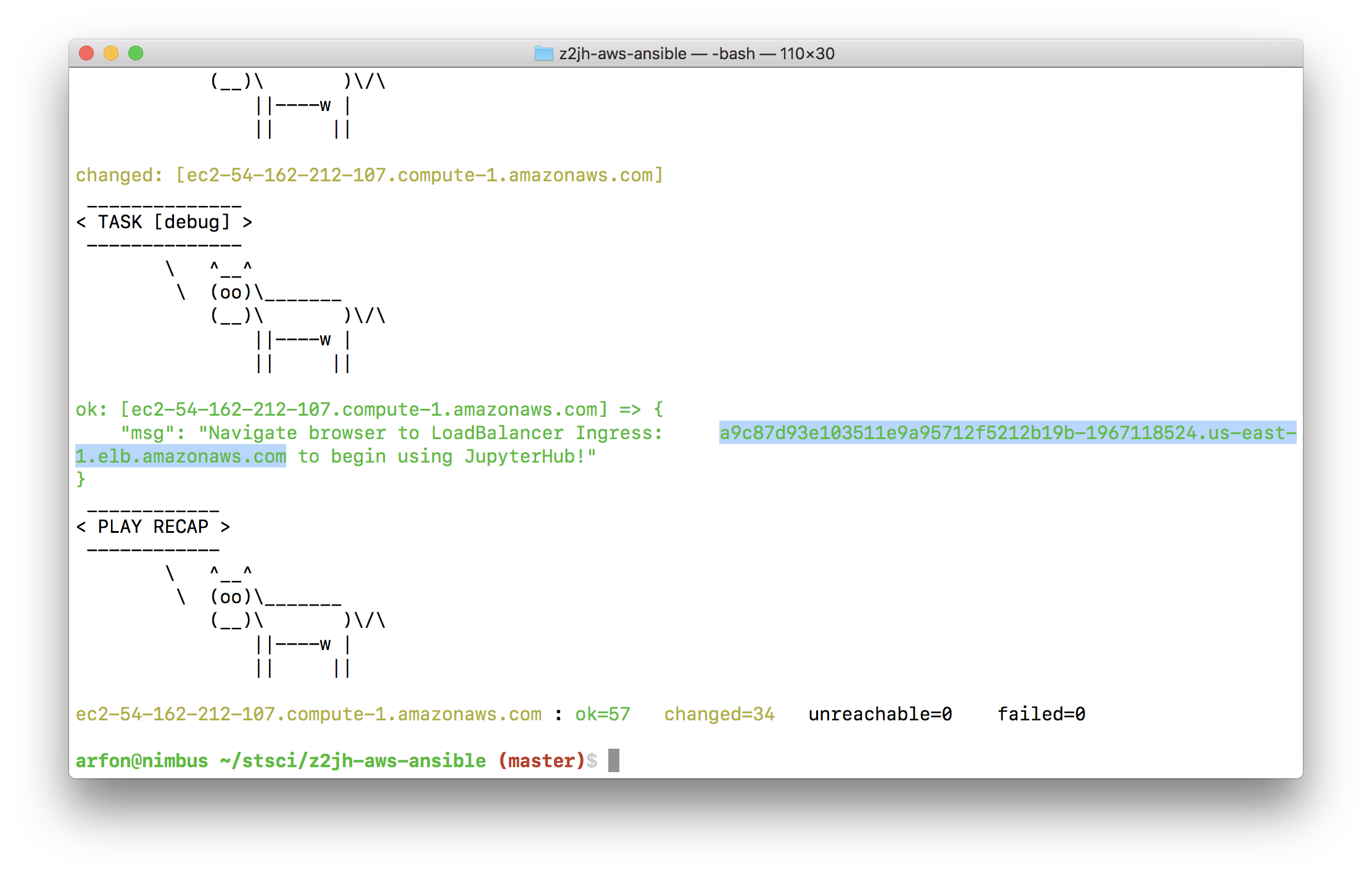 Note: you may have to allow for a few minutes for the public proxy to become available after the script finishes running.

The default Jupyterhub authenticator uses PAM and by default, any username and password is accepted. While this is useful for testing, it’s really not secure enough for real-world usage.

Fortunately it’s very easy to configure authentication via GitHub and we’ve created a second Ansible playbook to help set this up:

We’re going to create a GitHub OAuth application and that will point to our new JupyterHub deployment. To set this up, we need to copy the LoadBalancer Ingress value printed out at the end of the original Ansible play (We like to use Route53 to create a CNAME record that points to this, see below.) For this example, our Ingress value is:

Register a new application on GitHub

Visit the GitHub new application page at https://github.com/settings/applications/new and fill in the following fields:

So, for our example, we used the following values: 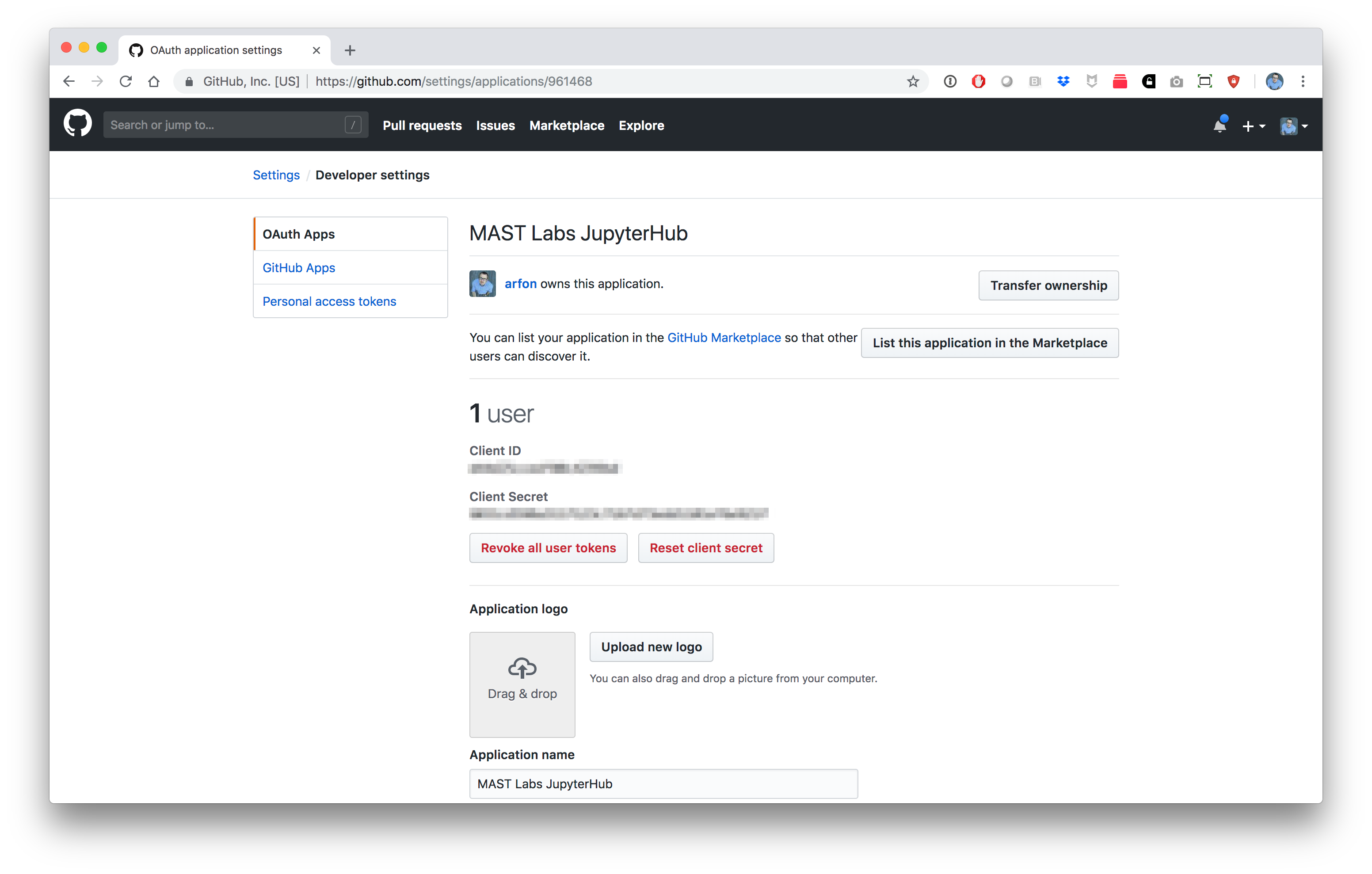 Copy the OAuth tokens for your GitHub application

GitHub will give you a client id and client secret that you’ll need for your group_vars/all file:

Note, the ingress value should include the http/https but not have a trailing slash.

Once this playbook completes, visit you Ingress URL again and you should be presented with a login screen with a prompt to ‘Sign in with GitHub’ 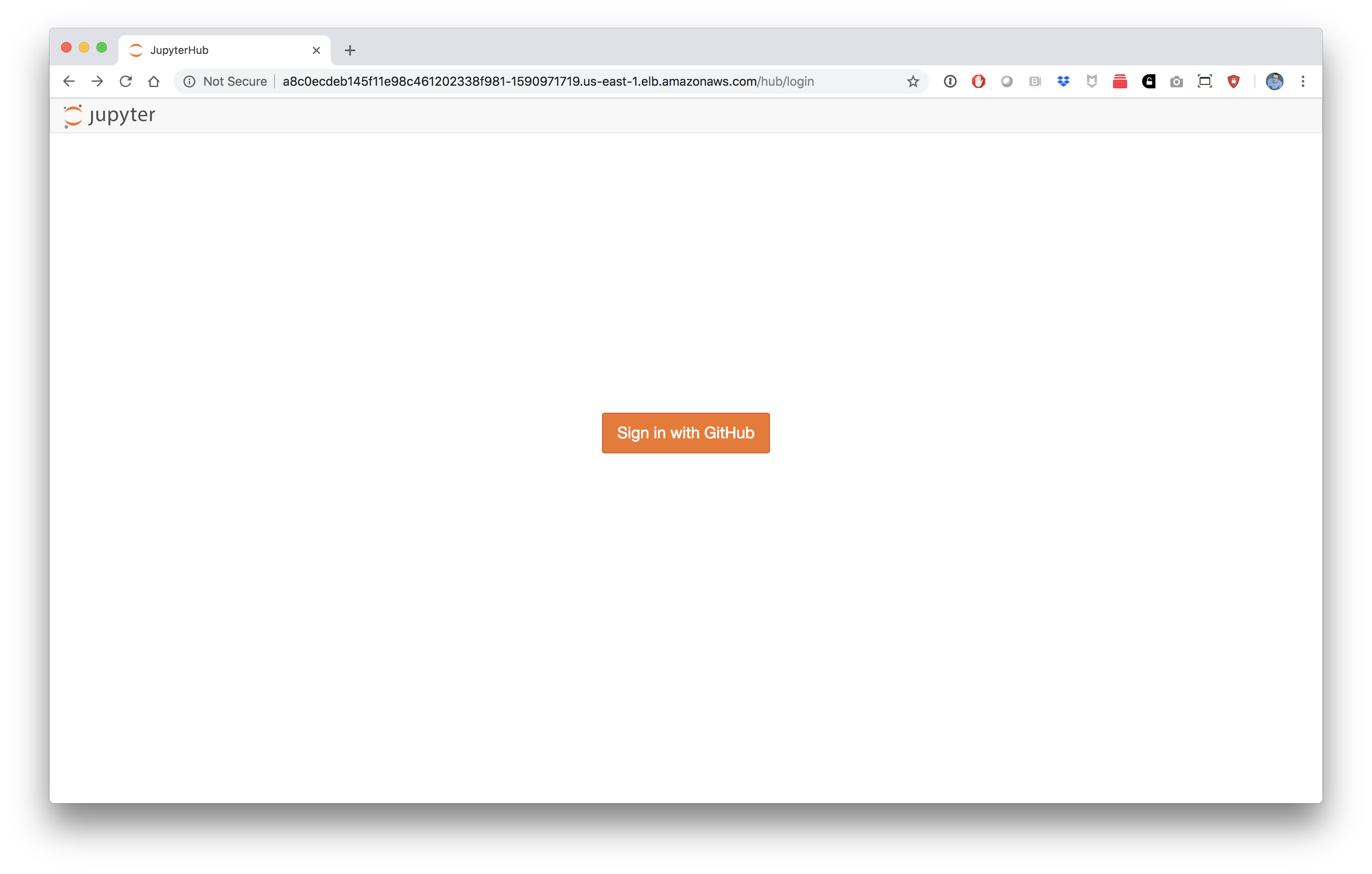 Signing into our JupyterHub environment with GitHub. 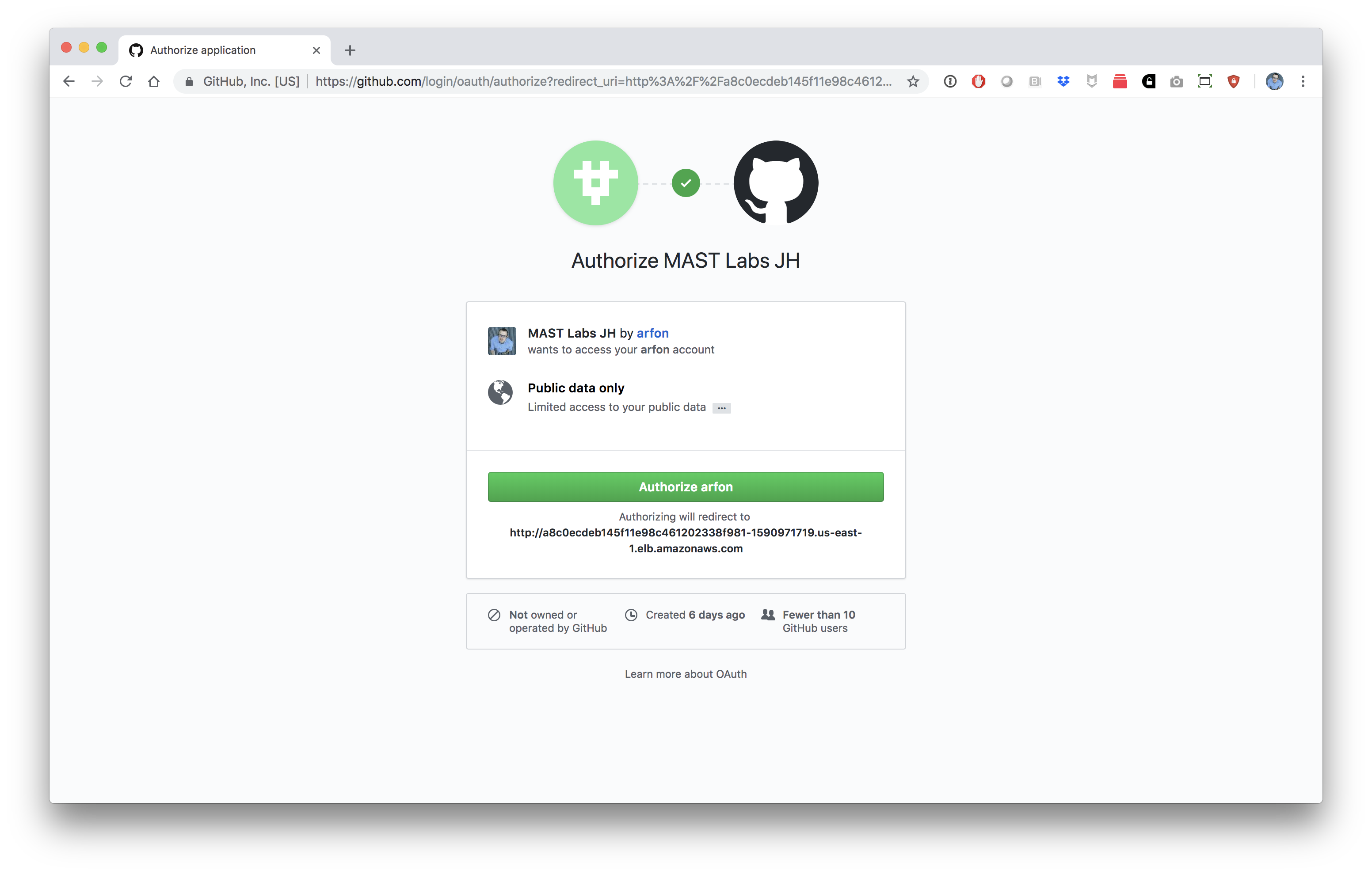 To logout, simply navigate to [your ingress]/hub/home and click logout in the top right corner.

At this point, we have a JupyterHub deployment on AWS, configured with GitHub authentication.

From here you can further customize your deployment by:

Idempotence is a term originally from mathematics, and commonly used in computer science and engineering to describe an operation that doesn’t change the result beyond the initial application if applied multiple times. This means, if we re-ran the ansible-playbook -i hosts z2jh.yml -v command immediately after the initial Ansible run, the playbook is smart enough to realize that all of the things you’re asking it to do have already been done.

We can leverage the idempotency we’ve built in to this Ansible playbook for ease of development to modify/update/upgrade our infrastructure. Sometimes, it’s a little easier to simply start from a fresh install when you see lots of errors and CrashLoopBackoffs. If kubectl or helm upgrade operations are fine tuning with a screwdriver, you can think of teardown.yml like a sledgehammer. For example, let’s say we wanted to swap out the base image defined in our groupvars that is used to spawn the JupyterHub environment but we want to keep the home directories of our users on the same EFS volume. This can be done as follows:

Finally, if you want to delete the JupyterHub environment you’ve created, (JupyterHub to Zero) you can use the teardown.yml playbook:

This will tear down everything needed for the JupyterHub environment, but only the parts of the infrastructure you specify. This playbook is intended to work with a cluster that was set up with z2jh.yml, and it keys off of the names that are generated therein. A number of different tags can be passed to this playbook:

Note that you’ll need to wait a few minutes for these operations to resolve before attempting to rebuild anything that was deleted.

This set of Ansible playbooks provides an easy way to create a simple, load-balanced JupyterHub deployment on Amazon Web Services that can be configured for your needs.

While the deployment offered by these playbooks is not quite a ‘reference architecture’ for a JupyterHub deployment as it lacks some important security pieces (such as configuring https) or system monitoring (observability) we think this deployment is useful for a small team/research group to begin using JupyterHub in their collaboration.

As we further extend these Ansible deployment scripts and develop our science platform and JupyterHub deployment at STScI, we’ll be updating the Z2JH Ansible repository.

Any problems, triumphs, suggestions following this tutorial? We would love to hear from you about your experience using these plays. Drop us a line at dsmo@stsci.edu

Brought to you by Jacob Matuskey & Arfon Smith